This is the third activity wristband that has been released by Fitbit this year which includes an inbuilt monitor for checking heartbeat.

It appears like a stylish watch and has a tough exterior body to withstand normal shakes and hand movements. Its design appears to be a cross between Fitbit’s previous trackers One and Flex due to its small OLED screen displaying details like number of steps taken during the day. The band is available in different band sizes that can be purchased from the company website and it clasps firmly around the wrist of wearer. The snug wristband is water resistant and can be worn by user in rain or sunny weather but should not be worn during swimming or taking a shower.

The device is Bluetooth 4.0 enabled and can be synced to your smartphone to share data or charge wirelessly through USB port linked to Fitbit’s app that is downloadable on smartphones. With battery life of five days you can run around your regular track without bothering to charge it.

Want to know if your exercise methods are actually reducing calories and fat? Use the exercise mode of your Fitbit charge to record details of workouts and their ability to help you reach the goals that you wish to achieve. The MobileRun feature on Fitbit App will allow user to set the pace and distance of regular jogging tracks that he/she uses on a daily basis.

Get updates about your body movement

Owners of Fitbit Charge can wear it even during the night and it will collect data about your sleeping habits and will report in the morning about total hours of complete sleep along with hours of restlessness. The update button on its right size allows user to view all current and past records on its brightly lit OLED screen with icon just before each section of statistics so you know what it represents.

While feet sign shows steps that user has travelled throughout the day while fire sign shows details of calories burnt and zigzag sign with up arrow for total number of stairs climbed. All this data is expected to work as a motivator for the person wearing the wristband so he/she can set a target for walking or walking up the stairs to burn target number of calories.

Managing data and details of your Charge Wristband

After a regular exercise routine remove your wristband and wipe it thoroughly to remove all traces of sweat and grime. As all your data is saved on the FitBit phone app you can review it every few months to check your progress. Want to avoid taking calls while exercising? Your Fitbit Charge will show caller ID on its OCED screen so you can decide whether to pick up the call or not. For an attainable price of $150 you can pick up your own Fitbit Charge at any major retailer. 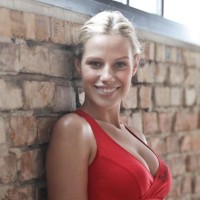 Jessica is a certified CrossFit Level 1 trainer, National Association of Sports Medicine certified personal trainer and is now the founder and coordinator of the @FitnessEquipmentsLab.